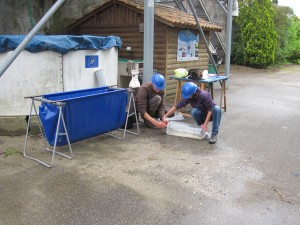 In the beginning of the 20th century, the Allis shad population of the Rhine suffered from overexploitation, destruction, pollution and habitat partitioning and went out. However, in recent decades, the environmental situation has improved and the return of this species was possible.

In 2007, LIFE Shad project was launched to reintroduce the Allis shad on the Rhine from the population of Gironde-Garonne-Dordogne, which at the time was the biggest population. Adult shads in upstream migration were caught on the Garonne and the Dordogne. Their reproduction was performed in artificial conditions and the fish larvae produced were released on the Rhine.

In 2011, the following of this program, the LIFE + Shad, was established to continue this stocking action on the Rhine, but also to carry out actions for the knowledge and preservation of the local population in sharp decline.

The actions related to the restoration of the French population concern monitoring of the development of juveniles in the natural environment, the study of the upstream migration at the barriers and fishways and a review of international knowledge on the fishways most appropriate to the species.